Banter:  Cher calls Sonny the jolly green midget. (Oy). He calls her precious and starts a new poem: "Fair Cher with the raven hair/For sure you are a winner/But when you're standing next to me/You look like a beginner." Sonny wants to start a The Sonny Bono School of Music. Cher says he should enroll immediately. "I'll pay your tuition." They discuss how bad Sonny's singing is. Cher then comes up with a poem, "Funny Sonny/I like to dance the rumba/but you can't dance/'cos you're a dumb goombah." They both laugh at each others' poems. There's a short joke. Cher offers to pound erasers and take attendance. They agree teaching is hard. Cher does lots of hair flips.

At the end Sonny picks Cher up and she screams. You can see him thinking about it before he does it.

Concert: “Crocodile Rock” (Video)
Cover of Elton John (1972)
My notes say this performance is bad. They're just off or the song isn't right for them. They’re dressed in red (Sonny) and blue (Cher). Sonny wears a loose blue tie and Cher wears a big red neck poof and a has her hair in a big bun. Cher looks like she's having fun and she throws her white mic around. They show the band during the instrumental parts. Cultural Spot: The Big Hit Parade. Cher playsa Brenda Starfilter, a poor little rich girl in a white pantsuit with jewels in her hair. Sonny plays an Elvis-looking down-and-out musician. John Byner plays Clyde Heavy, a hip disc jokey and chauffeur. I can’t really read my notes anymore. But this is supposed to be a satire of 1950s movie musicals and they sing a medley of the following: “Tweedle Dee” (cover of LaVern Baker, 1954), “Rockin' Robin” (cover of Bobby Day, 1958, although Michael Jackson had released it again in February of 1972), "Reelin' and Rockin'” (cover of Chuck Berry, 1957), “Do You Wanna Dance” (cover of Bobby Freeman, 1958, covered by Sonny &. Cher as Caesar & Cleo in 1965), “Your Mama Don’t Dance” (a more current cover of Loggins and Messina, 1972), and “The Rockin' Pneumonia and the Boogie Woogie Flu” (cover of Huey “Piano” Smith, 1957, redone by Johnny Rivers in 1972).

Cartoon: Back by popular demand, “Black and White” from episode #32.

Mr. and Mrs.: This is a very disturbing segment where Sonny comes home after being assaulted by “an aggressive woman” after he takes a shortcut home through an alley. (I'm noticing for the first time how they call each other Sonny and Cher in this skit). Cher asks, “Did you at least struggle?” (OMG) and Sonny worries, “I hope you still respect me.” (OMG) Why wouldn’t you respect a victim? It’s very icky, this script. Sonny gets mad and threatens to leave and Cher says, “You’re gorgeous when you’re mad.” (I'm all out of OMGs) Although the skit attempts to illustrate the frustrations of women when a script it flipped, it just doesn’t work in this case. For some reason, it only further illustrates the precarious situation for women. And in this age of thousands of "incels" advocating the legalization of rape (yeah, that’s a thing), this skit just illustrates how far we have NOT come, baby.

Sonny’s Pizza: Rosa wears short-shorts. John Byner does Groucho Marx and makes Sonny laugh. Byner plays the manager of Teri Garr, a singing starlet in a fat suit. She sings “I Got You Babe.” There are lots of jokes about Israel.

Solo: “Alfie” (Video)
Cher and Cella Black both recorded this song in 1966, Cher for the movie Alfie.
Cher wears the sparkle-studded-hooded gown here. I can't tell what color it is. It's got color. This is actually a nice, updated version of the song, with less innocence and more punch. She unrolls her nails again. This is a spectacular flair fest and we get some primo Cher-stare at the end. 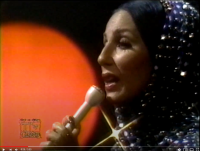 Chastity is dressed like Cher this week. Chastity calls herself cute. Sonny says if he doesn't say it, it doesn't count. Cher tells a story about how when Chastity was born Sonny thought she looked like Ava Gardner. Cher says, "So I was expecting Ava Gardner to walk in. You looked like an Eskimo who got into a fight and lost...something like Anthony Quinn." The irony here is crazy. Then Cher tells how Chastity's hair was black when she was born and how people said, "she looks just like you Mrs. Bono." Sonny indicates he feels left out of the conversation and Cher says she and Chastity are having "girlie talk." Sonny says Chastity is getting heavy and when he boost her up in his arms one of her shoes falls off. Cher grabs it and says, "Alright Cinderella, if this shoe fits you get to marry the frog." (laughter) "If it's good enough for your mother, it’s good enough for you.” Sonny smiles and says, "Your mother is very bright. She has quick quips." Then he says that must be the light bouncing off her nose. It looks like Cher has on green nail polish to match Sonny's jacket. They ask Chastity if she thinks Sonny is funny and charming. Cher notices Chastity has a new beauty mark and says, "Your Daddy doesn't have any beauty marks. I wonder why." And Chastity ad libs, "because he's short." They die laughing at that. Sonny tells Cher to “sing your song” before they sing the song. Chastity mouths along the words.

Highlights: Not really a highlight but the Mr. and Mrs. skit is a lowlight. Another instance of Chastity portrayed as a girlie-girl (with uncanny hints at another truth). A revamped "Alfie."