Opening Song: “Oh Babe, What Would You Say” (Video)
Cover of Hurricane Smith (1972)
Sonny wears a fully yellow suit and Cher wears a yellow polyester dress with a belly button cut out and tie and she has on round orange earrings. They look like they’re having fun. 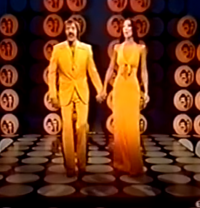 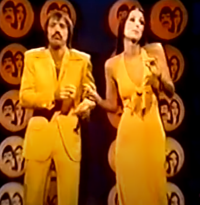 Banter:  Sonny can’t stop singing. There’s another Fair Cher poem ("Fair Cher with the raven hair/With her quips she can’t be bested/But then again I must say/As a wife, you’re a bit flat chested"). Cher says he’s driving her crazy with those poems. Sonny says, unbeknownst to her, he’s taken up painting (she says, "good, after the show you can paint my nails"), but he says he's painting traditional Italian portraiture. Cher talks about how their bathroom has just been painted and Sonny says Cher has no respect for “the canvass” and she talks about boxer Joe Frazier and good he is on the canvass. Sonny says he’s working on a life-size portrait and Cher says she has a perfect place for it, her wallet (that's a little short joke there). 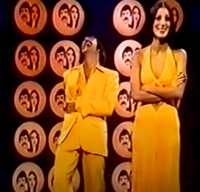 They finish the song and then get serious to tell the story starting in 1966 and John Nazmath being an early fan from their folk-rock days. He's a 25-year old Air Force officer named John Nasmyth, nicknamed Spike. In September of 1966 Sonny says, Sonny & Cher received their first gold album and on September 4, 1966, Nasmyth was shot down over Vietnam and has been a prisoner of war (or POW) ever since. Spike's name has been worn on a POW MIA bracelet during that time, bracelets similar to ones Sonny says he and Cher have been wearing. Sonny says this is a way to quiet, silently remember these POWs. After 7 years as prisoner of North Vietnam, Sonny & Cher "found out yesterday" that he came home on February 18, 1973,  and was a huge Sonny & Cher fan. Sonny says he asked his family for three things: the largest steak in California, updated clothes and Sonny and Cher albums. Sonny says "naturally we were flattered but they wanted to do more for him" (Did Nasmyth even know they had a TV show now??).

Sonny & Cher introduce him and Cher holds his arm. Captain John Nasmyth gets a standing ovation. Sonny is moved and says, "On behalf of our staff and America, thank you." Nasmth says the POWs talked about them while he was away and he is glad they didn’t "fade out" like other artists. Sonny jokes that Cher has faded a little but Cher exclaims, "Ah no, I’m bigger and better than ever!" She then kisses him on the cheek.

Here is page about the history of POW MIA bracelets.

"At the height of the bracelet’s trend, they were featured by musicians and TV celebrities including Sonny and Cher.  During a segment on their nationally televised show, the late Sonny Bono would describe the story of how a young Air Force officer, Capt. John “Spike” Nasmyth was shot down over Vietnam. “Spike became a name on a bracelet like this … We and a lot of other Americans have been wearing bracelets like this for a lot of years. It’s just our quiet way of letting them know that we remember the guys and they’re in our hearts.”

The nation would eventually grow tired of the raging debate over Vietnam and the interest in the POW/MIA issue would fade. In 1976 VIVA closed."

Nasmyth is mentioned in the book The Invisible Bridge: The Fall of Nixon and the Rise of Reagan in a section about issues for POWs readjusting to changes in America in the midst of Women's Lib. And in 2001, he published his own memoirs, 2355 Days, A POW Story.

Guest spot: Sonny & Cher introduce Tennessee Ernie Ford. Sonny wears a black suit and Cher is wearing a checkered top. They talk about his name. He sings “Printer’ Alley Stars” and the stage is very Elvis-like and full of people.

Sonny’s Pizza: Ted Zeigler does a prat fall, there are camera zooms. Sonny cracks up. I have a note that you can’t see half the set. Sonny says he needs a new maid. There’s a Listerine joke and an Italian lovers joke. Terri Garr plays an old lady. Ford plays a salesman trying to sell Sonny a pizza franchise. He calls Cher Miss Sonny’s Pizza. There’s a joke about Ford being Sioux-ish Indian and Jewish.

Concert: “Mama Was a Rock and Roll Singer” (No Video)
They’re still plugging their single as they did in episode 40, but in different outfits this time. They lip synch again. Sonny wears a pink suit, Cher has pink flower earrings and a white dress. She’s still smiling when she sings those mean lyrics about her. Again they do the first two song movements of the song but not the third.

Solo: “Am I Blue” (No Video)
Cover of Ethel Waters (1929)
There’s an initial shot of the proto-album cover for Bittersweet White Light which is set to be released next month (April 1973). There’s a big blue bulb behind Cher and she’s wearing a black lace dress with a black cap. Her rendition is similar but not a lip-sync of the album version. I’ve starred this.

IGUB: Captain Nazmath returns with his family. Sonny tries to whistle. They also talk about Captain Hayden Lockhart Jr. who has been missing 8 years. During the taping of the show they found out he has also come home.

Highlights: The POW stories are very moving and memorable. Cher does a good promotional plug for the song "Am I Blue" and Sonny & Cher continue to promote their new album of duets.