Opening Song: “Sunshine, Lollipops and Rainbows” (Video)
Cover of Lesley Gore (1963)
The applause is really loud at their entrance. It looks like Cher is in a business pantsuit. She wears big earrings. They’re both in all tan outfits. Sonny dances around Cher and she mimics his dance moves.

Banter:  They shake hands. Sonny brags that he’s getting a standing ovation. Cher says, they’re not standing, they’re leaving. He claims the show’s writers give Cher all the funny stuff (she shakes her head, no). “I come out like the yuck,” he says (and Cher nods yes).  He wants to go on record saying he is no dummy. He says he took 10 minutes out of his day to write a blockbuster bit for the show. He says it’ll have the audience rolling in the aisle. Cher says, "They’ll do anything to get outa here." Sonny starts to recite a new poem: “Fair Cher with the raven hair/your nose is big and splendid/but looking at you now/I wish other parts extended” and he's looking at her boobs. 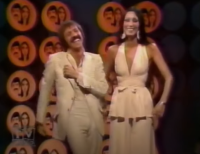 He laughs hard at his poem and makes a two gun gesture, like he got her there. Someone hands Sonny the script he wrote. He complains that he comes out the bozo all the time. Forget what the writers wrote for us, he says to Cher and read the script. Cher reads it, about how well Sonny sings (she says "that’s funny"). She reads more compliments about Sonny. He pretends false modesty. Cher rolls her eyes as she reads. He given Cher to say he’s made "his" show a big success and that he needs a vacation. He promises to take Chastity, Cher and Cher’s parents to the Indian Festival in Oklahoma. "Did you book a hotel," Cher recites.  Sonny says, “No, I thought I’d leave that to your folks; they’re experts at reservations!” Cher says "they once did an experiment" and 40 chimpanzees plus Sonny wrote that script.

Vamp: Sonny climbs up on piano in this segment.

- The Perils of Pauline: Cher plays Pauline, a silent star matinee damsel. Ted plays the villain, Snidely. Sonny plays Biff Binkey and he slips or trips twice in the skit. Sonny and Cher both crack up. There’s a Henry Kissinger joke and a joke about Cher’s "gazebos."

- Anna and the King of Siam: Cher plays a potential royal governess. He plays the King of Siam who has apparently sired 300 children. Cher asks him “haven’t you done enough?” Cher cracks up. Sonny shirtless alert.

- Sadie Thompson: They discuss a traveling filmmaker who wants to film “exciting wildlife” on the island which interests Sadie. Bill Van does his crazy cackle.

Cultural Spot: The 3rd Annual Bono Awards (Video)
Freeman King introduces the segment with a leather chair and a pipe. I think my brother used these TV costumes as prototypes to design my Halloween costume in 1977. Lyle Waggoner hosts again as Lyle Perfect with his rhinestone tooth (although this time multiple teeth are rhinestoned). Cher and Lyle crack up. She’s wearing her dress from the All I Ever Need Is You album back cover.

My notes list these first two awards in the skit, but they don’t appear in the clip above.

- Chad Everett wins for being perfect on Medical Center. He gives an emotional speech and thanks the little people.

- The Sports Award goes to Sonny as host Jim McCave for bringing obscure sports (like McCheese throwing) to Wild World of Sports.

- William Conrad wins for something. Lyle says there’s room for a fat hero. But not much room. Conrad is miffed he’s a recipient and not a presenter. He accidentally breaks the head off the award. Lyle ad libs about it.

- Jean Stapleton wins for appearing on this show twice thus far. She calls the award monumentally grotesque, misshapen and an ultimate in bad taste. She threatens Lyle, "If you ever dare offer me another one of these things again…I shall have to inform you what you can do with it."

- Tennessee Ernie Ford wins for being a funny country singer named after a state. Nominees were Minnesota Fats, Virginia Graham and Washington Irving. He gives the award back.

- The most adorable couple was invited, by Lyle says they couldn’t get Sanford & Son. So he introduces Sonny & Cher instead.

- Carol Burnett wins for being the most gracious lady in television. Cher comes out impersonating Cher and throws her long black wig in Cher’s face. Sonny, Cher and Lyle can’t stop laughing about it. 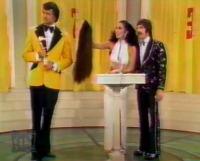 Sonny’s Pizza: One of Sonny’s cooks, Luigi, is getting married to his girlfriend Bubbles, who works at Body Burlesque. Sonny claims to know a reverend they’re all waiting for. Someone says, “You Italian people” and Freeman King does an impersonation of a stereotypical black preacher. The skit ends with Sonny staring into the camera.

Solo: “I Got It Bad and That Aint Good” (Video)
Cover of Duke Ellington (1941)
I’ve double starred this. Cher fades in as an image of a yellow rose fades out. They show the prototype for the album cover for Bittersweet White Light again. The album drops in April. There’s a big yellow light behind her. Cher wears a sparkly, pink dress and a short, rich-housewife wig. But those eyelashes are killin' it. She sings live with her hand on her hip. She rolls her fingers again. She sells it. Good stuff.

IGUB (Video, 9:24 minus chit chat)
I’ve double starred this too. Chastity wears a yellow-orange pantsuit and they say costume designer Rett Turner made it. They talk about Sonny’s chest hair. Chasity tries to tickle Cher. Sonny puts his hand in Cher’s face again when they say goodnight.

Highlights: Cher does a good version of “I Got It Bad and That Aint Good.” Carol Burnett’s impersonation of Cher is very funny and won’t go unanswered.