Subway Intro: Danny Thomas makes a nose joke about Lebanese beagles. Someone tells a joke misunderstanding the name of Telly Savalas as a foreign language. Teri Garr is the only girl on the train. 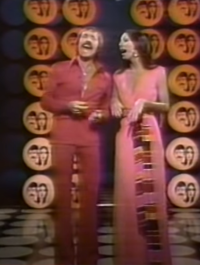 Opening Song: “I Couldn’t Live Without Your Love” (Video)
Cover of Petula Clark (1966)
Cher wearing a pink dress with a pretty stripped sash and she has hoop earrings. Sonny wears a pink shirt showing a lot of chest hair and jewelry, including his lucky Sicilian horn. Cher has smokey, glamorous eye shadow and does a lot of hair flips.

Banter:  Sonny says he’s had his family tree traced. “The Bonos go back to ancient Rome,” he says, back to Tiberius Bono. There are Italian jokes, Sonny singing jokes.

- Cher plays a Confederate spy in the Civil War (she wears a Scarlett O’Hara dress off the shoulders). Telly Savalas complains about women in the military. Sonny plays Private Lipshitz.

-  Cher as Barbara Nauceous who interviews Telly Savalas about the possibility of his having been offered money to pose nude for a women’s magazine. He insists he wouldn’t pose naked. She retorts that he wouldn’t be naked; he’d be wearing a straw hat.

- Sonny plays a masked stranger. Cher is a Mexican lady in a big dress. Apparently, she’s being sent to the evil court of Los Angeles (Danny Thomas). (There’s a cast run-in with the LA court there somewhere.)

- Cher plays an elderly woman approaching two men in the park, Telly Savalas and Sonny as a hobo. She wants them to walk her dog.

- A distressed man (Savalas) believes he has a jinxed wife, played by Cher as a long-legged redhead.

From the closing montage, there must be a missing sketch where all the men are wearing yellow.

Sonny’s Pizza: Danny Thomas owns a pet store next door and comes in to complain about the smell. Sonny is dressed as a clown as a mascot for his pizzeria. There are jokes about  Mickey McPizza and Sonny McFunny. There’s a Doc Severenson joke. The cast complains about the bad food: “how fast were you going when you hit that pizza?”

Concert: “Get Ready” (No Video)
Cover of The Temptations (1966)
I really wish there was video online of this one online. Such a cool opening I've never forgotten it over the years. The bank of lights has a square hole in it and Sonny & Cher stand in the gap while the lights are on the floor. As the song starts, the risers raise up. It’s very dramatic (but probably dangerous). Sonny wears a sparkly suit and Cher wears a 1920s styled gold dress and 1920s short wig. Where the hell is all her hair, goddammit!? She throws her mic around. Early evidence (pre-Charlies Angeles) of jiggle TV.

“A Story About Love:” This is a spoof on the 1970 movie Love Story. Cher plays the sick girl from a wealthy family.  Sonny plays the poor student in plaid pants. Danny Thomas is funny as Cher’s disgruntled father. There’s a joke about Ali McGraw and Steve McQueen. Cher coughs a lot and says she has a mysterious “affliction.” Cher plays a popular preppy girl and all her prior boyfriends come to wish her farewell: boys from Harvard, Yale and Princeton. They start to look like The Village People of the future (a Viking and an Indian chief come by).  This is another illustration about Cher's defiant promiscuity. They all sing three songs. Somebody says “Love is never having to say you’re poor.” Sonny & Cher are gleefully not poor anymore. Cher sings “What Do I Care (My Preppy).” There’s a Make Room for Daddy joke. Cher does her death scene in Laverne voice.

At the Lauderette: Teri Garr wears her bra showing on her shoulder under a green sweater. Her hair is in big curlers. Laverne arrives in her outfit with long ball earrings and glasses hanging around her neck. They discuss the price of meat and Watergate turning into a soap opera. Cher asks “does a bear live in the woods?” and maybe the audience knew she meant “does a bear shit in the woods?” but I sure didn't up until about a minute ago. Laverne says she’s heading for a divorce with Harry. They don’t have sex and he won’t do the laundry. Olivia folds some huge pants which she says are her husband Burt’s. Olivia gets a laugh with a joke about The Sensuous Man, which is a reference to The Sensuous Woman written by Terry Garrity in 1969.

Skit: Danny Thomas is a U.S. Senator eating dinner and he tells his waiter (Telly Savalas) there’s a bug in his soup. (Watergate reference.)

Solo: “If” (No Video)
Cover of Bread (1971)
I’ve starred this. Cher’s hair is in a big bun. She sings with a white microphone. Vaseline smeared everywhere on the lens. Hand on hip. The usual stuff. This time there are backup singers!

IGUB: The family is very touchy this episode. They ask Chastity to guess their ages. Mommy is rated as 4 years old and Daddy is 6. Cher points out the wrinkles around Sonny’s eyes. Sonny jokes, “look at my teeth!” They talk about why Daddy always holds Chastity. Mommy holds Chastity at Kiddie Land. "Daddy is too tired then," Cher says. They talk about the trouble Ret Turner goes to in making Chastity’s outfit match Sonny & Cher’s outfits. They talk about Chastity’s boyfriend named John Capalov or something like that. Chastity says something about not wanting to be a girl anymore and Cher covers her mouth. Self-knowledge in the mouths of babes.

The announcer says over the credits that the role of Danny Thomas is played by Amos Jacobs (which is his Americanized real name).