This is the Years Part I episode and it has a different beginning. Dick Clark narrates claiming to be hosting “a very special” episode and there's a unique cartoon for this episode. Clark says something about a worn out comb or some artifact being emblematic of the 1950s.

Full disclosure, this episode and its sequel were always my least favorite episodes of their show. It’s unfortunate because Years I and II are actually good shows. But I just hated the 50s-retrospection at that time (from the vantage point of my tweens, teens and young adulthood while MTV was in full swing) and I hated any interruption to the S&C show formula I so loved. These episodes also felt like a hint of the end in sight for some reason. I had no idea they were "last season" shows but I got the feeling as far back as 13 years old when I saw the first rerun of this episode on my local UHF channel. It felt doomy for some reason. These episodes instinctively depressed me. But honestly, Dick Clark has that effect on me sometimes.

Opening Song:  “Rock and Roll Is Here to Stay”
Cover of Danny & the Juniors (1958)
Everyone is wearing white outfits. Sonny & Cher are wearing baby-blue and white outfits. Sonny’s necklace is huge. He doesn’t seem to know the lyrics to the songs. The stage is big this season, thankfully, so they can switch off to showcase all their rock-and-roll guest stars.

Jerry Lee Lewis sings “Whole Lotta Shakin.” Sonny & Cher dance along. You can see the other acts setting up (it’s like a Jools Holland’s show from the past). (Video) 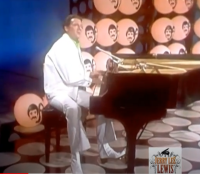 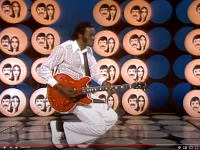 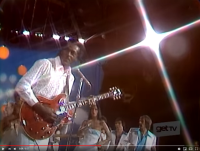 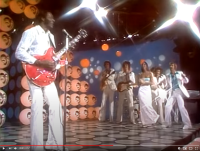 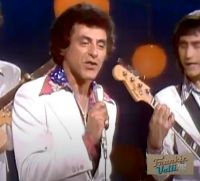 Sonny & Cher Myth: Dick Clark tells the tale of Sonny & Cher as “two kids in love" (Sonny was already on the dark side of his 20s). Clark mentions the "typical Italian wedding" with relatives dancing. "Her relatives danced when it rained" (reference to Cher being Indian). We're shown pictures of Sonny & Cher from the 1960s. Clark talks about “the excitement that would evoke crazy clothes.”

We then have The Wedding of Sonny & Cher skit: the whole wedding party is stuffed into an elevator. Dick Clark is the best man and Billy Van plays the priest. Chuck Berry makes a joke about Sonny being tuneless. Cher comes aboard with very thick bangs (you can’t even see her eyes). She acts out all of her early innocence. She looks more like Karen Carpenter for some reason. Her veil is huge and she has less makeup on than usual for this show anyway. They are united as Cherilyn SarKEYsian (for guidance on how that is pronounced) and Salvatore Bono. They decide to pass on the wedding kiss and everyone piles out of the elevator.

Vamp-ish:
This is structured like the Vamp and Lady Luck segments, except Cher is in a puffy 60s dress and laying on an old car.

- Freckle Talk (not sure what that means but it sounds like a riff on Pillow Talk): Cher plays a Doris Day type and Dick Clark plays a Rock Hudson type and his wig falls off. The skit plays on conservative and freaky stereotypes and juxtapositions.

The same ending with the green screen captures of all the characters.

Cultural Spot: An epic rock adventure in a 1950s Diner with Sonny as Sonny Snivle, an Elvis-like sensation who meets a young fan, redheaded Cher, as Sarah Lou in a poodle skirt. During a fight, Sonny drops his guitar and they laugh. They sing a song about “rock, rock, rock bliss.” Cher’s star begins to rise but not before she asks, “What did I just sign?” Someone mentions there’s only room for one star. They sing “Superstar,” a song from the 1960s. Cher is transformed into a gold-space princess. Sonny wears matching gold and they’re a husband and wife act until Cher gets too ambitious, calling Sonny a fink and yelling “I’m gonna be bigger than the Beatles, Steve and Eydie…” I’ve starred this segment because it’s eerie in its very meta visual depiction of Cher’s future transformation into a space princess. I wish this skit was online. It's very predictive.

Solo: “Chastity Sun” (Video)
Cher re-written cover of “Ruby Jean & Billie Lee” by Seals & Crofts (1973)
Sonny and Cher wear weirdly unmatching outfits in this intro. Sonny introduces this song talking about the Bono Brigade and the “two ladies of my life.” Was he yet living with his
girlfriend by this time, Connie Foreman? She's always referred in press as "a cigarette girl from Pip's" which is interesting considering later Cher's boyfriend Robert Camilletti would be referred to as a bagel boy from Queens. 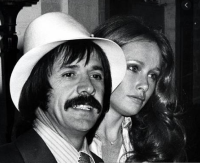 Cher, in virginal white and lip syncs the songs as a video plays of Cher and Chastity, including labor room photos, pics of their wedding rings and the “Congratulations! It’s a girl!” and the famous LA hospital button, and that photo lining up all the generations of women in Cher’s family. This is a pretty important video of Cher scholarship as it includes private family photos of the birth of Chastity and early years. Note the shot of their wedding rings. 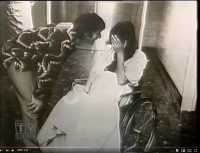 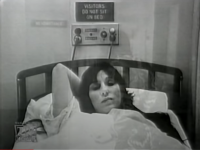 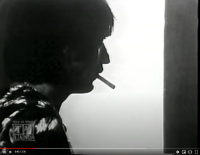 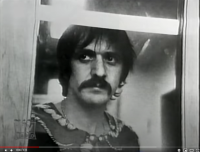 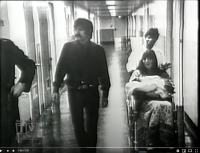 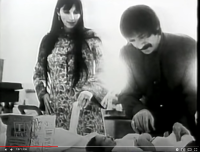 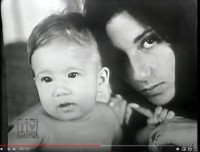 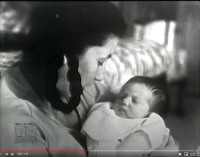 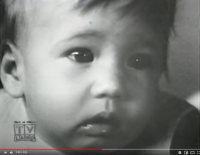 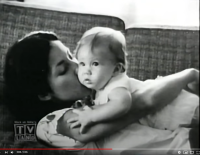 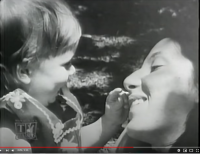 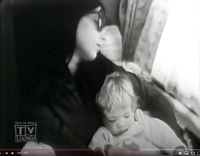 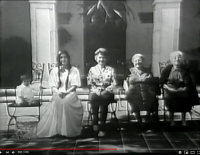 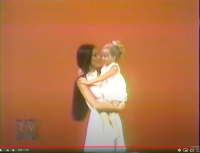 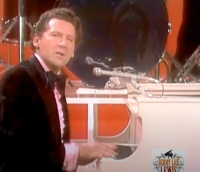 Sonny sings “You Better Sit Down Kids” – It's odd to insert this 1960s song here with these historical songs. He seems not sure where to move at the end. 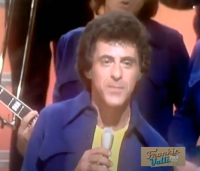 Sonny & Cher sing “Bang, Bang (My Baby Shot Me Down)” They do a good cover of this. Is this the only time they've song the song as a duet? Sonny gives a smoldering look after his part. At the end of Cher's part she does a move you might recognize from even current performances, hard to describe but looking off and down. Her whole style of singing now is different and affecting a kind of rock cool distance from the material.

Chuck Berry starts “Reeling and a Rockin” and they all join in, ending with “I Dig Rock and Roll Music.” Sonny puts his arm around Jerry Lee Lewis at the end. The gesture is not reciprocated.

IGUB: No song in my copy or goodbye. They just retreat off the stage.

Get TV skipped the Vampish-50s segments.

Highlights: Despite my childish reservations, this is a good reunion of 50s-era rock-and-rollers and some of the skits are either oddly predictive of Cher’s future or sweetly respective of their fake past. Cher's later-day singing style emerges. As an old lady I have a better appreciation for the excitement of Jerry Lee Lewis and Chuck Berry (historically speaking that is; I was in St. Louis when his East St. Louis club was busted for having cameras in the ladies bathroom stalls…there’s that.) I've always had a soft spot for Frankie Valli.