Subway Intro: There’s a pincher on the train. Teri Garr is the only girl on the train. Someone asks, "How do you get to CBS?" Truman Capote answers, “Sing off key and hook up with some foxy chick. That’s how Sonny Bono got there.” [I remember when “fox” and “foxy” were compliments. Anyway, as if that’s all she was.]

Opening Song: “Get Down” (Video)
Cover of Gilbert O’Sullivan (1973)
In many ways this episode seems like a holdover from last season. The stage is small again, there’s a Vamp segment. But there’s also a Laverne segment. There’s are no breakouts during the song and a regular type banter. Cher wears a white dress with ruffled or sculpted looking straps. Sonny wears a white jacket and a blue t-shirt with a sparkly star on it. Cher’s makeup is pretty. You can hear her hand snapping and loud clapping. Eye contact seems an issue for Sonny, but not for Cher. 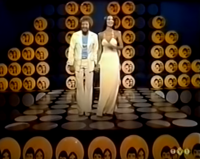 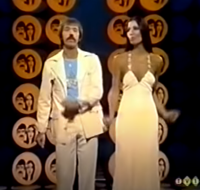 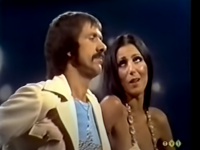 Banter: They shake hands and talk about the news today and how hard it is to believe everything you hear on TV. It’s a Barnum and Bailey world full of deception, Sonny says. Cher challenges that and asks Sonny to take off his platform shoes. She calls him “elevator man.” Cher’s pretty funny here talking about how they picked the right song to sing tonight. Audiences yell for him to “take it all off.” Cher says, “I’ve seen it; it’s nothing.” Ouch. Sonny retaliates with a flat boobs and a nose joke. 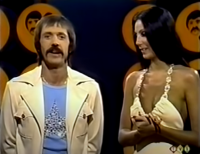 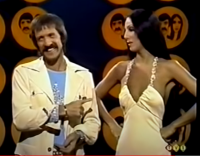 Vamp: Vamp is back. Cher has a sparkly head covering.

- Lady Hamilton: Truman Capote plays Lord Horatio Nelson. They’re on a ship. You can really hear Capote’s lisp. He forgets his line. Freeman King feeds it to him. Sonny does a pratfall. John Davidson plays Captain Dupray. Capote has awful timing. But despite all this, I’ve starred the episode as enjoyable.

- Lady in Red: Cher plays the lady in red. Someone plays John Dillon. Chastity is dressed like a mini vamp and sings the vamp song and then winks. I’ve starred this too because it’s pretty adorable.

Window on the World: Topics include the energy crisis, dolphin tuna, the Godfather movie, suicidal daredevils, the Nixon tapes, racial humor, Bobby Riggs, cheap air flights and prison reform. Capote never turns his head or moves with the cast when they move.

At the Launderette: As Laverne arrives Olivia is singing. They talk about socks, sex stuff, sex perverts and Olivia and Burt.

Concert: “The Weight” (Video)
Cover of The Band (1968)
Another opening with the cool ceiling raising up! Why do I like that so much? Cher wears a beautiful backless gold dress with awesome flowing sleeves. Sonny wears a brown suit with an orange scarf. Cher wears a braided ponytail that’s very cool. Hand hangings. Some good whoops. Cher does a good job here. I’ve starred this. (Click to enlarge)

Sonny’s Pizza: They talk about politics. John Davidson comes and talks about his cousin who is in prison. Davidson ends up ordering a pizza and antipasto but takes away Rosa instead.

Solo: “Superstar” (Video)
Cover of Delaney & Bonnie (1969) Cher’s own single version from 1970 (Atco) predates both The Carpenters August 1971 hit and the popular bathhouse Bette Midler version from February 1971. Cher wears a curly updo and a blue, rhinestone encrusted halter dress with a feathered skirt. She’s got pretty blue eyelids. The torch light is blue. The flares sometimes whites out the camera. She really belts it out at the end. 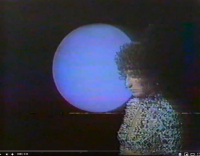 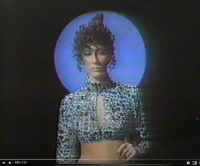 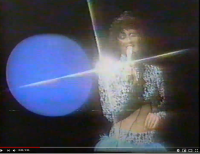 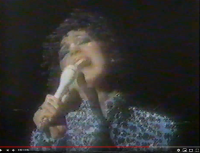 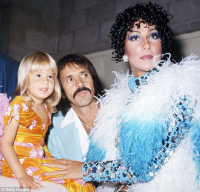 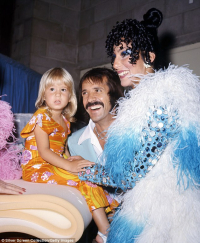 This is the same outfit she wore for one of her appearances as ringmaster at the 1974 Ringling Bros circus in Inglewood. The outfit might be up for auction again. 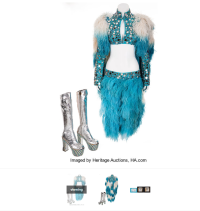 Cher also wore a red outfit as ringmaster for the same circus, which sold for $3,520 at Bob Mackie’s Julien’s auction of 2018. 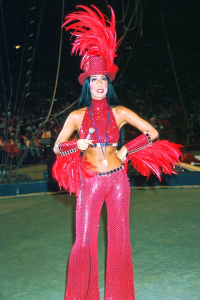 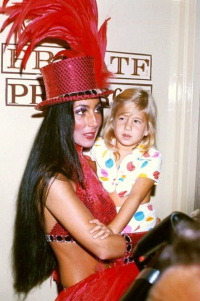 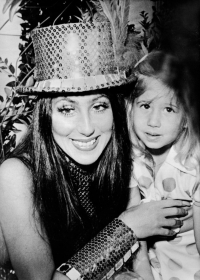 So 2003 wasn't the first time Cher was a ringmaster. 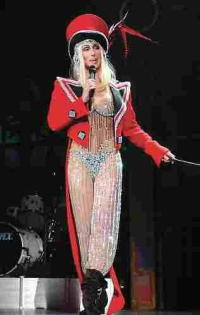 Highlights: The performances of "Superstar" and "The Weight" are good, Truman Capote is memorable in the Vamp sketches.