Subway Intro: Ted Zeigler is looking for celebrities on the train. Peter Cullen does a John Wayne impression. Sally Struthers calls Sonny Meathead. Dennis Weaver is also on the train. 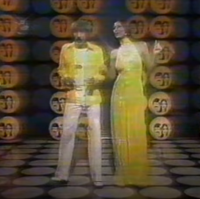 Opening Song: “Everyday People” (Video)
Cover of Sly and the Family Stone (1968)
They wear yellow, Cher with a big sunflower on her pantsuit. The stem goes all the way down her leg. She wears big hoops. Sonny’s hair is getting long. He wears a yellow shirt over a white t-shirt with a bee on it. The do a lot of "whoops" and "woahs." Is singing this song meant to be ironic?

Breakout: Cher wears a fat suit and is in Weight Watchers. She’s wearing a mom-hair wig. Sonny is acting loose. They look like they’re having fun.

Breakout 2: Ted Zeigler is on death row. Dennis Weaver warns him he has 10 seconds to live. Zeigler says he's made a lot of big mistakes and won't make any more if they spare his life. The Governor calls to stay the execution and Zeigler says "tell him I'll call him back."

Banter: They shake hands. Cher puts down Sonny’s height and voice, references his “elevator underwear.” Sonny talks about the oriental philosophy of tranquility. Uncle Luigi is referenced. They hold hands.

Sonny's Pizza: Sonny is tied up. Rosa and the staff recreate a break-in robbery for police investigator Dennis Weaver. Cher says, "It was so frightening!" and Weaver says, "Don't tell me! I've eaten here before." The robber allegedly said "I want all our dough" and Sonny allegedly offered him 16 pizzas. They hit each other over the head with empty bottles of wine and Ted Zeigler and Billy Van knock themselves out. Cher says the robber kissed her and she re-enacts this with Dennis Weaver. He tells her this is no neighborhood for their pizza parlor. Cher says she didn't know anything was wrong with the neighborhood and Weaver blames their pizza parlor. They untie Sonny and Weaver says he has to take Cher with him because she's the best kisser he's had in years. They tie Sonny back up. The skit ends with a Sonny stare. 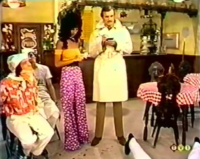 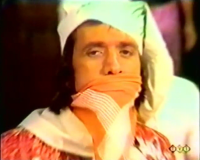 Concert: “Everybody’s Movin’”
Cover of Lynn Anderson (1972)
Sonny wears a black suit and Cher wears an off-shoulder cow-print outfit. Sonny is in a black suit and bow tie. Cher looks like he's having fun but Sonny is not so much into it. They do a little country step back and forth at the end. 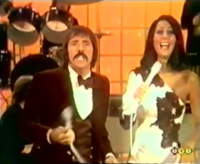 Mr. and Mrs.: My notes say “Where is her hair!?” Sonny is doing needlepoint in the beginning while Cher watches Billie Jean King on TV. Sonny gets mad  and starts to vacuum. Dennis Weaver comes over looking roughed up. He says he made a beef stroganoff in lime sauce dinner but his wife came home drunk and got violent. Cher says she doesn't believe him. Teri Garr arrives as the drunk wife Bonnie. She attempts drunken karate on Cher and knocks herself out. Dennis then turns on Cher and goes back home with Bonnie. This is actually a disturbing skit. Too lifelike to be funny. 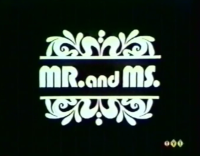 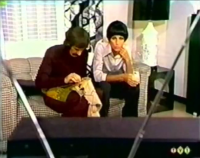 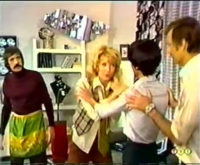 Vamp: Cher wears the new headband with rhinestones, the curly wig and a red dress with cut out diamonds. She twirls beads. She’s very tan. 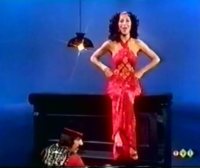 - Rose Marie the Canadian Mountie. Weaver plays Cher's Dad. She's trying to get married. A group of men arrive whom Weaver calls the Marx Brothers. He calls Sonny Ugo and asks them to fight it out for Cher's hand in marriage and "some other good stuff too," she says. They go into a cabin and Smokey the Bear wins the fight. The skit ends with a Sonny stare. 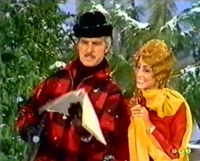 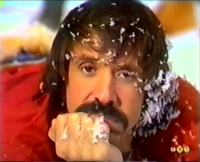 - Peggy Flemming: Cher plays Peggy with long nails. Dennis Weaver plays a Russian skater trying to talk her into teaming up. Chastity is still up on the piano again here between skits looking a bit insecure. 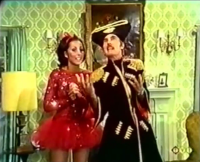 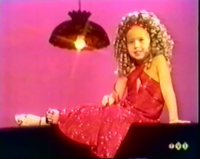 - Sadie: Sadie bumps into the preacher and his dinner hits Ted Zeigler in the face. A Hemingway-like hunter/writer arrives on the island. There are double entendres one about Cher showing the island’s “Southern exposure.” The writer plans to do an novel about the island but ends up offending them all. There are mustache jokes and they tell him he has a "mother complex." Cher decides to write the expose herself and the skit ends with a Sonny stare. 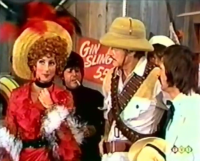 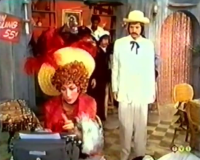 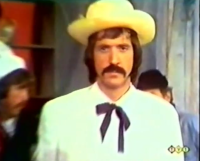 Chastity is in the montage shaking hands with everyone. 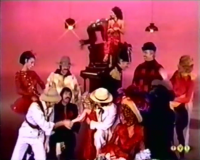 At the Launderette: Laverne says "Hey Kiddo" when she comes in. [My Dad used to call me kiddo.] Olivia and Laverne reference watching All in the Family. Laverne says she doesn't need to watch it, she lives it because her husband Harry is a bigot and that he hates everybody. Olivia says her husband Bert hates Women’s Lib. Cher gets all the jokes and even does an ad lib. Laverne says men just want women as their playthings. Olivia asks if Women's Lib will change all that and Laverne says, "God, I hope not." They then talk about open marriages. Laverne says "You wouldn't catch me doing that" and Olivia questions her more and she says, "I didn't say I wouldn't do it. I said you wouldn't catch me doing it!" 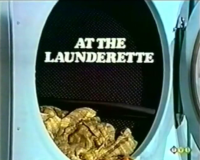 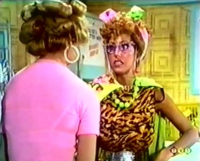 Guest Spot: Dennis Weaver sings “Hollywood Freeway about “forty-minute drives bumper-to-bumper in a parking lot. The musicians are seen but only in shadow. Weaver plays guitar. 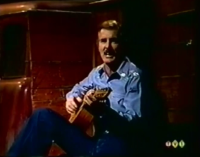 Skit: Le Bombe Squad is a skit with the French Legionnaires and Cher as a French maid. I like these French Legionnaire sketches. They’re throwbacks to the show’s early days with set-less skits but funnier. Cher brings in Le Bombe and they go through the routine of finding Le Cover, Le Screw, Le Fuse. A french police wagon arrives with Ted Zeigler, the bomb expert, and he blows up the bomb in the wagon. 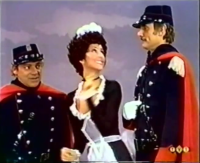 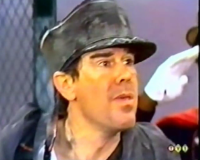 Solo: “More Than You Know”
Cover from Broadway musical Great Day (1929)
She also sang this in episode #6.

IGUB: Chastity is in yellow and sings along this time, even the three baby, baby, babies Sonny sings, mouthing the final verses. Cher and Chastity give big smiles at the end. Chaz upstages Cher. 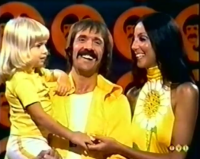 Highlights: A French police sketch. Cher's first (of many) televised performances of "More Than You Know." Chastity has been vamped for the second time now.