Subway Intro (Video)
Fake help requests and compliments pass from passenger to passenger as a guise to steal a shortage of subway straps. Thank God subway bars were invented. Teri Garr does a good job dressed as a frumpy elderly lady who is thwarted at every attempt she tries to get the strap from Jim Neighbors. In the last moment you can see they've rigged straps to a bar.

Opening Song: “Everything is Beautiful" (Video, 7:18)
Cover of Ray Stevens (1970)
Sonny is wearing a white suit. Cher is in crisscross cut-out gown. She’s wearing big hoops. There are background singers! Cher claps loudly. She keeps grabbing Sonny's arm and puts her hand on his shoulder.

Breakout: Sonny meets Jim Neighbors in the park and they exchange compliments although Neighbors can't bring himself to say he likes the way Sonny sings. Sonny says he doesn't mind the jokes about his singing. Sonny tries to prove the adage that "someone who likes kids and dogs can't be all that bad." (How this follows from bad singing, I do not know.) Sonny calls for Lassie. Sonny and Neighbors sit down. You can see Sonny's platform shoes. Sonny tries to get Lassie to do some tricks but only Neighbors can get Lassie to do the tricks. At least kids like him. Cher comes by as a kid and sticks her tongue out at him.

Banter: They talk about Sonny’s physique and there’s a Jack LaLanne reference.

Lady Luck (Vide0)
"How'd ya like to try my little game of chance? You can win a pot or you could lose your pants. Wherever there's a chicken to pluck..." I don't even like the dress. -  Sonny, Cher and Chastity with Lassie. Cher and Chastity are in matching night outfits. They have to give up Lassie because she got out and bit the neighbors and pooped on the lawn of some other neighbors. Sonny & Chastity walk Sonny to the door and he tells her to say goodbye and Chastity says, "Goodbye Daddy." We get a Sonny stare and Neighbors takes Sonny away.

- Telly Savalas talks about how CBS has green-lit his new show Kojak is starting and will air the same night as The Sonny & Cher Comedy Hour. Before they told him about it, he says, he had a full head of hair.

- Cher plays an English Lady being fought over by two knights (Jim Neighbors and Sonny) in the style of a boxing match. There's an unfortunate joke calling Sonny "the fairy Prince" instead of "the fiery Prince" because "that's what you get for riding your charger side saddle." Cher blows a whistle to stop the match. 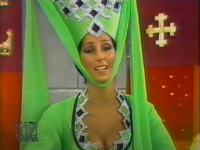 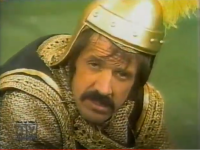 For some reason, only the last skit's characters join the final montage. 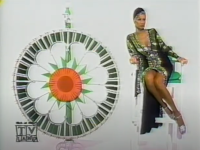 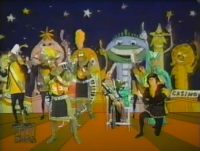 Mr. and Mrs.: Sonny is cooking. Jim and Sonny talk about husband swapping. Teri Garr comes by as the wife of Jim. I wish there was an online video of this one with Sonny cooking.

Solo: “Cry Me a River” (Video)
Cover of Julie London (1955)
Cher wears a short haired wig and a business pinstriped pantsuit, albeit a very sparkly one. She licks her teeth. She wears a big pink scarf and there's a pink light. Cher seems to be really into this on and she really rips a river out of it at the end.

At the Launderette: Harry has ring around the collar. There’s a Dick Butkus joke.

Concert: “Delta Dawn” (Video)
Cover of Tanya Tucker (1972)
They wear yellow outfits. Cher’s in another crisscross top with a bare midriff. Belly button alert. She's also wearing delightfully fluffy long hair and big gold hoops. Some good hanging hand. Sonny is wearing a Mr. T's amount of necklaces. I love this song. I circled the inside of our house signing it over and over again when I was about four or five years old. I’m sure that didn’t drive my mother crazy. I love hearing Cher sing this. 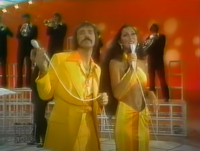 Cultural Spot 1: Spoof of Planet of the Apes. They joke about how Jim Neighbors talks in one voice and sings in another. There’s a joke about Los Angeles violence. The humans are in a zoo. Cher plays an Eve type character.

Cultural Spot 2: A pirate opera. They sing “King of the Road,” “Tie a Yellow Ribbon,” “Wichita Lineman” and “He Ain’t Heavy” and Cher plays a wench who takes over the ship.

IGUB: Short with Chastity. No song.