Subway Into (Video)
Ted Zeigler plays a somewhat fay gay man. Billy Jean King says she’s not Cinderella, the girl with a wicked stepmother, but Billy Jean King, the girl with the “wicked backhand.” She says she’s willing to meet Prince Charming…at the Astrodome for a tennis match. Zeigler is looking for the owner of a glass slipper, but Andy Griffith wears his own slipper. The last joke from Griffith: “If you see Mr. Capote, tell him it was a swell party.”

Opening Song: “All I Really Want to Do” (Video, 2:28)
Cover of Bob Dylan via Cher’s own hit (1965)
Sonny wears a pink suit and tie and Cher wears a baby-blue slip dress. They’re wearing gender-bending colors for this episode. They’ve added their own new lines to the song: “fake you out, forsake you out" (whatever that means). I can’t hear all the new lyrics. 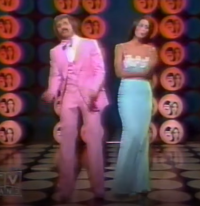 Breakout 1: Sonny & Cher are on Safari in the Superstition Mountains. They’re looking for the Last Dutchman (Billy Van with his woodpecker laugh he does). The scene ends with both Cher and Sonny giving the camera a Sonny stare.

While, they’re still singing, Sonny yells “Play it! Go ahead!”

Breakout 2: Sonny has climbed Mount Fujiyama, "the tallest mountain in the universe" (that's actually Mount Everest). A Penthouse Pet is there in a white bikini working on a nude layout with photographer Andy Griffith. They make a dumb model joke. They want to set the record for the fastest man to the bottom so they throw Sonny off the side. “That Sonny Bono is really amazing,” Andy Griffith says, “he even screams off key.”

Banter: They shake hands. Sonny says, “It’s good to see you’re back” indicating Cher might have been MIA for some reason. Cher quips, “It’s good to see my front.” Sonny retorts, “Same thing.” They talk about Billy Jean King being on the show and how she recently beat a man in a tennis match, the famous head-to-head event with Bobby Briggs. Cher quipped that King could beat a man in a pink dress to boot. This gets a big applause. Cher tells King she loved her win. Sonny countered that Briggs just had a bad night. Cher retorted with “you’re an expert.” Sonny challenges 180 million people to beat him at what he does best.” Cher ends with “at least you won’t have to sing.”

Window on the World:
My notes call this set "Hillbilly Hangout." Topics include: U.S. Wealth Bureau, tropical storms named after women, Julie Nixon Eisenhower, Leonid Brezhnev, Japanese cars, Russian trade. Teri Garr actually has lines in this! They do a skit about Billy Jean King’s wedding dinner party and the Bobby Briggs themed dishes: aged ham (full of baloney). King “serves meatballs.” Murray Langston plays her husband in the skit. In another skit Cher plays a National Geographic photographer and Sonny plays Bob Guccione posing nude. The Penthouse Pets are there and all seem mesmerized by Cher and stare at her the whole time. Cher throws her hair out and then poses for Bob herself. Bob gets naked (another shirtless Sonny alert…again with the medallion!). In another skit, Andy Griffith and Sonny are astronauts in space with a gorilla. The gorilla gets a banana as a reward. Sonny is rewarded with Penthouse Pets. He asks for a banana instead. The skit ends with Andy Griffith staring at the camera. Chastity sits on Cher’s lap. Toward the end Billy Jean King is holding the hand of Bob Guccione and boys in the group descend on Billy Jean King and she laughs but it’s all very weird.

At the Launderette:
Laverne has picked up Harry from a pushup. One dumbbell is enough, she says. Billy Jean King brings in her laundry. They talk about male chauvinists, Women’s Lib, feminists and divorce. They talk about football player Rosie Grier versus writer Germaine Greer. They talk about marriage being for better or worse and sticking around to the end, or sticking around until something better comes. They dish about male tennis players as sex objects, whistling and “lewd talk.” One of their husbands weighs 207 pounds. They mention Howard Cosell again (he was referenced in the opening banter, too).

Concert: “Rockin’ Down the Highway” (Video)
Cover of the Doobie Brothers (1972)
Sonny wears a sparkly suit. Cher wears silvery pants  and a flower halter and short Breck-girl hair. It’s a mess of noise but Cher is enjoying rocking out. She twirls, throws and grabs her mic. 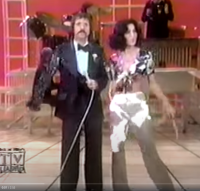 Solo: “Yesterday” (Video)
Cover of the Beatles (1965)
Cher in a high bun and curls around her face, big hoop/chain earrings. She wears a blue halter top with blue and white feather boas attached like wings to her shoulders. The background is white. This is a quiet version. There are backup singers. The view is blurry. She belts it out in parts and curls her fingers out with her long nails. She smiles at the end. It looks like she has feathers also coming straight out of her vajayjay below low-slung pants. Her belly button is obscured. There's side boob. 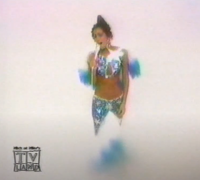 Cultural Spot: Freeman King introduces the skit from the leather chair. He wears glasses. This musical is called Never in America (!) and Andy Griffith plays a United States president being spied on from Russian agents. They try to get him to talk into his ashtray and other objects. Teri Garr and Ted Zeigler play Russian ambassadors/spies. But as it turns out, Griffith is trying to record/spy on them as well.

Cartoon: “Gypsy Rose”
Cover of Tony Orlando and Dawn (1973)
Sonny sings this one solo. It’s the most anti-feminist part of the show. It’s about an unsatisfied housewife who leaves home to become a burlesque stripper. Sonny sings at the piano. By the end the gypsy returns to being a wife. She sees her husband and kids misbehaving again and gets annoyed again but doesn't leave. The family is watching the Sonny & Cher Comedy Hour on the cartoon television. So meta!

IGUB (Video, 11:41)
They thank their guests. Chastity wears a blue outfit matching Cher’s dress. Cher holds Chastity’s hand as they sing. At the end, Sonny waves to the audience with his hand over Cher’s face. 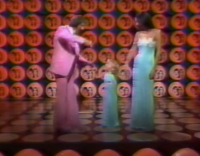 Highlights: Great opening dialogue about Billy Jean King’s win against Bobby Briggs. Two Sonny shirtless alerts in one episode. The entire episode (it seems) deals with feminist topics. The reference of the Sonny & Cher Comedy Hour in the cartoon segment about the unsatisfied housewife is ironically and probably unintentionally pointing to the power of the show for women in the 1970s. In hindsight the show was very subliminally feminist as it gave Cher one-upmanship in almost every situation or skit.