Subway Intro (Video)
All the guest stars are on the subway. Tourist Ted Zeigler tells Rita her name is a good name for a president (Coolidge), Ted misunderstands the famous song Kris Kristofferson wrote, “Me and Bobby McGee,” (“Sorry, I thought you wrote it yourself”) and he takes offense at Douglas Fairbanks Junior’s name. When Zeigler says the name Kris Kristofferson, Fairbanks Jr. says gesundheit.

Opening Song: “Say, Has Anybody Seen My Sweet Gypsy Rose” (Video, 2:35)
Cover of Tony Orlando and Dawn (1973)
These matching pink outfits are on one of the DVD collections.  Cher wears a great belt and swinging, pendulous earrings. Forget Charlie’s Angels, this is early jiggle TV! Allegedly Cher’s dresses were 2,000 dollars a week to create I've noted. Cher is enjoying herself and doing a few burlesque moves. 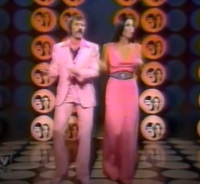 Breakout: Cher plays an old lady and Teri Garr plays her scantily-clad stripper daughter. Cher wants her to quit all the “bumping and grinding and loose living...Come home and we’ll bake pies…” but once she finds out Teri is making “two grand” a week, mom starts stripping too.

Banter: Sonny says “I look at you and I feel things. Well, I try.” And later says, “I’m so clever.” Cher retorts, “I know, you’re such a wit…dim.” Sonny thinks he can fix the food shortage and inflation (Cher does a mother-in-law joke). Sonny asks her if she knows what the price of spaghetti is these days. Cher says she’s still paying for the meatball. That gets a big laugh. Sonny proposes Meatless Tuesdays, Fishless Wednesdays, Fruitless Fridays and Cher suggests Sonnyless weekends. There’s a garlic dessert joke. (I’ve been making a few recipes out of a Sorority cookbook from the early 1970s and nothing has garlic. It’s hard to believe that was such an exotic ingredient back then.)

At the Launderette: Olivia’s hair is in curlers usually. Do I mention this? They talk about mechanical things “like a frying pan” and planned obsolescence. Laverne talks about her real marble earrings. Laverne in the laundromat can be self-obsessed and manic, much more so than when she’s on other shows like Flip Wilson.

Concert: “That’ll Be the Day / Oh Boy” (Video)
Covers of Buddy Holly & the Crickets (1957)
Cher wears a Toni Tennille wig with bi-lateral bangs and a high-slit purple dress. Sonny is in a silver suit. It’s all very manic and yell-y. We get a cool shot of the white and clear risers  from the back of the stage.

Skit: Douglas Fairbanks Jr. and Cher, who plays a nurse, do a spoof of a British movie. Kristofferson tries on an English accent and Sonny plays a station master.  I wrote down “Twas the Night” but that doesn’t show up online anywhere. Teri Garr is also in the sketch.

Guest Spot: Rita Coolidge and Kris Kristofferson sing “Why Me” on a country stage. Rita wears an Indian-themed outfit. She is of Cherokee/Scottish heritage.

Window on the World: Topics include Linda Lovelace, Sin City, astronauts on the moon. There’s a skit with Barbara Nauceous and Douglas Fairbanks Jr. as a fisherman. The boys in the store make Cher laugh during the singing. There’s a skit between Kristofferson playing a baker and Cher ordering a very complicated birthday cake message based on the “You’re the Top” song from the musical Anything Goes. (Video)

Chastity sits with Cher and Cher asks what Chasity would do, “If you were president, Chaz?” and Chasity says “I would release the tapes.” It's interesting how the show always portrays Chastity as a sage character, possibly smarter than her parents (at least on the later-day shows if not these earlier ones). Here is a good early example and I think it's likely one of the reasons why Chastity was given the role of president in a futuristic episode of The Simpsons.

Solo: “You’re Nobody Until Somebody Loves You” (Video)
Cover of Dean Martin (1964)
She wears a polyester Island or tye-dye-on-white outfit with really cool sheer pants, a head-wrap with flower and long, white turquoise earrings and a big turquoise necklace and ring. The background is white and the screen is heavy with Vaseline. This is a spunky version of the song. 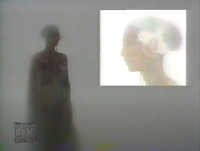 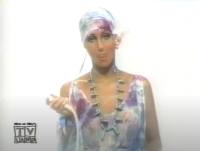 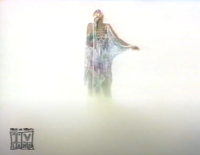 IGUB (Video, 13.11)
Sonny says, “This is the spot where we do the sentimental kid bit.” This reminds me of the somewhat manic infomercial out now for the Time Life set of the show. They’ve left an example of this segment almost uncut, so much did people love this part of the show. It packs an emotional punch of familyness).

Chastity (wearing a matching pink ensemble) went to Kiddie Land that day and all the rides were her favorite ride. Chastity thinks this week’s guest was Lassie. Sonny says, “That was three weeks ago you had Lassie!” Cher said “Lassie made a definite impression on her!” I’m reading Vincent Price’s biography by his daughter Victoria Price. I just read the part where as a kid she met Cher during a late-1973s tapping and she too was more impressed by Lassie.

Highlights: An early instance of Chastity characterized as smarter than the rest of the cast. There’s an eerie Sonny death scene and mention of him as El Primo. The closing number is slightly meta.