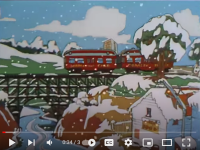 Subway Intro: Similar animated subway open but the intro says "It's the Sonny & Cher Christmas Show" instead it’s snowing. Ted Zeigler is the conductor walking through the train and meeting a down-and-out stock broker, an alcoholic and a pick-pocket. Poor Teri Garr is stuck squashed in a seat.

Opening Song: “Jingle Bells” (Video)
Sonny & Cher wear matching red outfits. Cher has her hair in looped braids. Chastity is in a plaid dress. The family sits on the couch. This is a "very special" episode seemingly off-stage, a kind of "Sonny & Cher House Party." The cast and William Conrad are there, as is some fugly wallpaper and couch upholstery. Everyone is singing, decorating and giving gifts. People seem to be having fun. Cher cracks up. Camera exits thru window.

Skit: William Conrad is a homeless man who approaches Teri Garr and Ted Zeigler’s house. He offers to shovel their drive with their own shovel, but is invited inside where the rest of the cast is eating dinner. Everything is pantomimed as if they are all observed from outside the window. Conrad eats all the mashed potatoes and lots of food while the cast is not looking. He finishes a whole turkey. Teri Garr offers to play a record album, “Sonny Sings Christmas” (not a real thing) and Conrad is horrified and immediately leaves. He interacts with a snowman and then approaches Sonny & Cher’s house. He offers to shovel their walk...and then we assume another Christmas dinner begins.

Skit: Sonny, Cher (in a brown hat and jacket) and Chastity are at the store visiting Santa (William Conrad). Sonny sits in Santa’s lap. Sonny asks for big, tall shoes. Cher sits on Santa's lap too and says Sonny also needs new vocal chords, a house for his mother and a cure for garlic. Santa quips they're really cute at this age, aren't they?

Cartoon: “Higher Ground” (Video)
(Christmas DVD only)
Cover of Stevie Wonder (1973)
An appeal to our better natures. The animations stays pretty faithful to the song (Socrates, soldiers, the destruction of Rome, politicians lying to old Americans and new Americans and an alternative higher ground: Notre Dame, the Sistine Chapel, and then the cycle of violence repeats until aliens land at the end (and leave).

Like the earlier Christmas show (with "One Tin Soldier"), the cartoon ends with a Sonny & Cher Christmas card and a bit of "It Came Upon a Midnight Clear" but not the same part of the song as last year's.

Skit:
(GetTV version only)
Sonny & Cher are at home with Chastity who wants a bedtime story. Sonny invents a fairytale with Italians and Indians. There's a talking bear and Cher and Chasity are plains Indians (complete with teepee) looking for snow. This bizarre adventure was ambitious, part animated blizzard, part mafia, Teri Garr plays spring and gets to show off her ballet moves. They're all looking for "old Chief winter" and although the whole thing is pretty stereotypical, these are great sets, like living pop-up books. Sonny plays Hot Air. It's overly long.

Christmas Carol Medley:
We are back in the European Christmas village and Cher is back in her Victorian garb, complete with hat, shawl and muff.

This is the exact same lineup as last year. But other Cher scholars have studied the two segments side by side and say they are not exactly the same.

Sonny’s Pizza: Cher has Christmas-ball earrings and a red and green outfit. The staff is decorating the restaurant and Conrad comes in as a wine salesman. The new 55 mph speed limit is discussed. While they all decorate a tree, Sonny proposes to Rosa and Rosa suggests they can marry in 8 years.

Song:
(DVD Collection only)
Sonny on a set of snow with a snowy bridge sings “Twelfth of Never” and the family gathers for a kiss at they end.

IGUB: There's a fire in the foreground. From the living room set they say goodnight with William Conrad who recites “Yes Virginia, There is a Santa Claus” from a New York Sun 1897 editorial, while the family watches rapt but I've always found this part so boring I can't focus on it no matter how many times I've seen it but the poem is about the heart of childhood, the unseen Santas, Virginias and fairies. Chastity looks pooped. The credits display "Season’s Greetings from" and just the names without titles. Back then nobody lost their minds over that bit of generic greeting. An instrumental version of "I Got You Babe" plays. Finally the announcer says, "This is Peter Cullen wishing you a very merry Christmas."

Highlights: A whole episode devoted to Sonny & Cher ostensibly in their natural habitat.