Opening Song: “Top of the World” (Video)
Cover of The Carpenters (1972)
Sonny wears an orange jacket and Cher is in a dress with black, purple, pink (and one yellow) vertical stripes. Sonny is wearing a big medallion. He's feeling playful and tickles Cher. 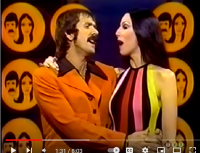 Breakout 1: Ted Zeigler plays the man of the mountain. Sonny & Cher climb to the top in their furs asking about their marriage: is sex important? (I didn't write down the answer!)

Breakout 2: OJ is playing football and yelling at Sonny.

Banter: Sonny shakes Cher's hand again and again calls her Pal-y. They talk about each other's outfits. Cher finds a blonde hair on Sonny's suit. Maybe part of the script, maybe not considering he was secretly dating Connie Foreman at the time, "a cigarette girl he met at the Pips night club in Beverly Hills" according to the internet. Cher had been secretly dating David Paich (future member of Toto and son of their sometime musical director Marty Paich). She even brazenly sang a song to Paich on her 1973 Half Breed album before Sonny & Cher announced their breakup. But we digress.

Sonny sheepishly claims he was "playing with the baby" before he came on stage. She quips, "she doesn't have black roots." Sonny is speechless. America is clueless.

Sonny starts yelling football calls. Someone throws him a football. It's football playoffs and Superbowl time, which is why football jokes are sprinkled through these January episodes. Cher accuses Sonny of playing too many games without a helmet. Sonny says he played in high school. Cher says, "You mean Al Capone Memorial High?" Sonny says he was also head of the Marching Band. Cher accuses the band of marching out onto the field and spelling everything wrong. Sonny says there are no Indian football players and Cher says the best one is Indian and she's crazy about him: Indian Joe Namath. Sonny says Namath is really a Hungarian from Pittsburg and Cher says, "that's close enough for me." Sonny introduces OJ Simpson and is so excited he stumbles on the words. He calls Simpson "the greatest running back of them all" and the crowd cheers for a long time. Sonny quips that his reception was equally as long when he came out tonight. They talk about Simpson breaking Jim Brown's running record. Simpson says it was a team effort. Sonny says, "like Cher and me." The audience laughs and Sonny says, "We couldn't do it alone. Really." Cher raises her eyebrows and says "speak for yourself." She will soon do it alone and the show sort of set up the idea that she was always thinking about going it alone (although she wasn't and was very worried about a solo career). Sonny tries to give Simpson the Bono Award and Simpson looks dismayed and doesn't take it.

- Cher plays a doctor. Sonny and Ted Neely are players (Sonny claims to be the "star quarterback of this team") and Simpson plays the first black team owner in the NFL. A player has broken a lot of things. Cher shows them a box of all the broken parts. She says, "I'm afraid he won't be playing any more today." Simpson says in that case he will trade him to Houston. Which prompts a Cher stare.

- Cher plays an adorable cheerleader with a chorus line of other cheerleaders as they sing, "Football, the game America loves the most."

- OJ plays a coach. Billy Van is a Hungarian Vampire football player.  A mummy comes out of a locker.

At the Lauderette:  Laverne is doing football moves. She says Harry gave her a "living bra." She says she's having an affair with Bruno (are we preparing America for the demise of Sonny & Cher?) and girl's football teams. My notes are bad for this part of the show.

Concert: "River of Love" (Video)
Cover of B. W. Stevenson (1973)
Their big set is back. Sonny is literally wearing a sparkly halter and red pants. Unbelievable. Cher is wearing a purple skirt, a shiny purple shirt with great wrist sleeves, a small afro wig and big concho earrings.

Sonny's Pizza:
The Superbowl is playing on a TV shelf. It's a rented TV and Sonny is complaining about the colors on the TV. There's a bad joke about foreign players. The staff is playing cards. The TV shelf collapses.

Fortune Teller: Jack Palance is inside the booth. Ted Neely and OJ are talking to him. OJ calls him an ugly old gypsy lady (I wish I could find a photo or video of this). Palance gives a football fortune. There's a Nixon joke.

Solo: “Holly Holy” (Video)
Cover of Neil Diamond (1969)
Cher wears a very pretty metallic blue dress with white stiff collar and sleeves. Her hair is piled high in a curly bun. The backdrop is white. The dress seems very Christmas-y. This is a great rendition of the song.

IGUB: Chastity forgot to make up a joke for this episode and redubs the show "The Chastity and Sonny Show with Special Guest Cher Bono." When Sonny fumbles his words, Cher says, "Say goodnight Gracie" in reference to the ending to the George Burns and Gracie Allen show.

Highlights: Their private life peeks out in their opening banter. The Fortune Teller takeover. Cher's version of "Holly Holy."