Subway Intro: Teri Garr and Danny Thomas are on the train talking about energy conservation. Thomas says "home James" to either the conductor or his chauffeur (?), a line which is coincidentally (or not) from Cher's new single, soon to be released in February of 1974, "Dark Lady," ("she said, 'Home, James' and he hit the gas.")

Opening Song: “Heartbeat, It's a Love Beat” (Video)
Cover of The DeFranco Family (1973)
They're both in white outfits with red hearts pinned on. Sonny has his medallion on again. They're separated but affectionate. Who knows what "bickering Bono-ness" is happening backstage. 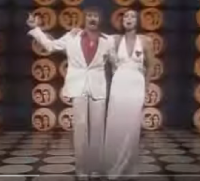 Banter: Sonny basks in the applause and says "Cher is partly responsible to" which gets no laughs so Sonny admits the joke has bombed. He says they need some adventure in their lives. Cher raises her eyebrows and says singing with him is all the adventure she can handle. Sonny says he's going on an African Safari and calls himself the Great White Hunter, "a man who stands his ground in the face of a charging rhino. Do you know what they call a man like that, Cher?" She says, "El Stupido." She flips her hair. Sonny stumbles through some African words. He asks for some tom-tom music. He's hunting the giant gorilla of Zambingo. He keeps missing and Cher asks him to stop, because if Sonny misses again the gorilla will die laughing. Cher tells Sonny to start practicing by sleep outside in the yard. (And their yard right now is one of the biggest estates off Sunset.)

Mr. and Ms.: Sonny is trying to read on the couch. Cher wants sex. Sonny's reading "The Male Mystique" about becoming a leader of men's lib, having a strong handshake. The skit gets meta when they start talking about men on TV and the Sonny & Cher show and Cher talks about the TV-show Sonny's body. Sonny-of-the-skit says he's through with chauvinistic, feminist- pig attitudes. He says men plan to "burn our jokey shorts" and vote.

Cliff House (Video)
The cartoon intro card looks very Scooby-Doo like. Billy Van throws water on it every time someone says "Cliff House." Cher plays Lucretia, the maid. She is dusting and makes a skull sneeze. Danny Thomas plays one of the members of the mansion's family having an affair with the maid. Thomas says he wishes to be married to Lucretia but needs to be master of the house. They talk about killing Aunt Agatha with arsenic and a horse inadvertently dies as well. (Backstage they try to prank Thomas with sounds of the horse's death but he makes a funny ad lib). To marry they will need to remove another obstacle, Sonny who plays old Uncle Oliver (also of the portrait). They conspire to throw Uncle Oliver out the window. But he survives. So they try again. Thomas then double-crosses Cher and she throws Thomas out the window. Sonny survives yet again complaining they're all out of relatives now so Cher dumps him out of the window a third time. These Cliff House sketches are some of my favorites. I love the sets and the gothic silliness. Plus they seem to be having a good time.

At the Lauderette:  Laverne talks about her trip to Hawaii and what Harry drinks. She says he's a picky eater.

Sonny's Pizza (Video)
There's a joke about how hot the pizza plates are (with or without oven mitts). Cher settles a check for Teri Garr (a blonde bombshell) and Murray Langston (an old man). Langston makes a scene about what a rip-off dump the place is and as he's leaving you discover he's Sonny's Dad. Rosie wants to know why his Dad is always in a bad mood. Sonny says his older brother is a lawyer and his younger brother is a doctor and his Dad is disappointed that they're all not in the pizza business. Danny Thomas comes in and orders a single pepperoni (he doesn't like pizza). The cooks thing Thomas is the "guy who escaped from the funny farm last week." Thomas starts to act bizarrely, demanding milk for his invisible dog. Peter Cullen and Freeman King show up as police officers. They hesitate to arrest him until they're sure he's the right crazy man. Thomas tells Sonny how great the pizza is there and the officers say, "that's proof enough" and grab him. Sonny, Zeigler and Van question his sanity until the invisible dog starts to drink the milk.

Solo: "Dark Lady" (Video)
This was the first unveiling of the new Cher song. She wears a black dress with mesh covering and a big mesh headpiece. She sings in front of a big blue light. She sings live and sings "She delt two cards, a two and a three" instead of "She dealt two cards, a Queen and a three." Yes, they're using poker cards to do tarot readings ("You have a royal flush in your future.") Lots of hanging hand and lip licks. The sequins catch the light. She also sings "laughing and dancing 'til they saw the gun in my hand" instead of "laughing and kissing 'til they saw the gun in my hand." The song will hit #1 on Billboard but Cher isn't sure about it and you can almost see it on her face at the end. She's living with David Geffen and both Geffen and Bob Dylan have by this time already told her the songs sucks and not to release it.