Subway Intro: Ted Zeigler is a commuter along with Jim Neighbors and Larry Csonka (a linebacker from the Miami Dolphins) who falls out of the subway window (?) and nobody knows who stole whose wallet. Subway humor.

Opening Song: “You're Sixteen”
Cover of Johnny Burnett (1960) and Ringo Starr (1973)
Cher looks very tan. Sonny is in a black suit and bow tie. Cher in black gown with white zigzags and white dangly earrings. My notes say Sonny seems manic. One of the few opening songs not to be found online for some reason.

Breakout 1: A submarine skit with Jim Neighbors who wants to be a torpedo.

Banter: There's no banter in this episode on TV Land or GetTV.

Cultural Spot: Freeman King announces the first episode of the fat-suit people, Tonsmoke. Neighbors plays Fat Dillon (his fatsuit is coming apart) and Cher is Miss Piggy. Sonny plays the villain Fatsus. Ted Zeigler plays Wyatt Burp and there are references to Wide Bert and Fat Masterson. This is the skit where every time a food is referenced, like "We're in a jam," the cast rubs their hands together and says "mmmm....jam!" In this episode they did it for "mmmm....jam!" and "mmmm...pickle" and "mmmm...stew" and "mmmm...chicken" and "mmmm...pretzel" and "mmmm...fudge" and "mmmm...piece of cake." During the shoot-out, nobody can reach their guns. Sonny keeps laughing. When they fall over, it's hard for them to get up. Fat-shaming or no, I've starred this.

Concert: "Hi-Heel Sneakers' and "Barefootin" (Video)
Cover of Tommy Tucker (1963) and Robert Parker (1966)
Sonny is in a pink tied-off satin shirt (cabana-boy style) and black pants and Cher is in a tropical dress, both looking very Miami. I'm shocked they got Sonny to wear this, quite frankly. He's got his new medallion on. Cher is in an afro-ponytail and she does a lot of mic tossin'. There's a hint that Sonny might be uncomfortable in his shirt when at the end he does an exaggerated curtsey's like a girl. Not cool Sonny.

Solo: "Working Together" (Video)
Cover of Ike and Tina Turner (1970)
Cher wears her macrame headpiece and choker and a matching crumb-catcher (as my friend James calls them) dress. (My TVLand version has the song cut off soon after it starts.). Good hand-hanging. Cher sings with conviction, "There are people here who are still not free" and "let us put our hate aside." A song as relevant today...

You may recognize th

is headdress as the one Cher will wear a few weeks later at Bob Dylan's 31st birthday party on February 21, 1974.  In different accounts, Cher either sings "All I Really Want to Do" or "Happy Birthday" to or with him and The Band. The photo evidence: 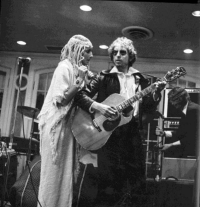 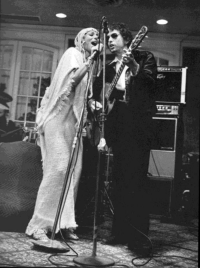 - Cher as Anne Boleyn wears a curly wig and a shiny red cut-out dress. She plays the harmonica and sings a spiritual song awaiting her execution. Sonny plays the fat Henry VIII. Her lawyer is Sir Perry of Mason, Jim Neighbors. Cher sports a dotted line on her neck. Neighbors talks of their nights of wild abandon. There's a Spiro Agnew joke.

- Sonny plays George Custer in a bad yellow wig and Cher plays Libbie, his wife. There's an Indian/Armenian joke, a sword joke and a gay joke. Sonny, shot full with arrows, goes through the wrong exit door. Is this Custer's last stand? No, "it's Bono's worst performance."

Sadie Thompson: Sonny trades places with a drunk sailor to avoid getting hit by Cher's entrance hip assault. But the drunk can't stay on the chair. Sonny jokes that her bumps are radar-controlled. Jim Neighbors is an ornithologist (an expert in birds), Sadie jokes she's a horny-thologist. Sonny is called a twit. Neighbors tells them all to leave the island to save the birds. Larry Csnonk gobbles like a turkey whe he comes to deliver a telegram from a bird. There's an NFL owner joke. Cher jokes about the wild life at her sanctuary.

GetTV is missing Sonny's Sports Shorts. Both episodes are missing the Danny Thomas' skit on noise pollution mentioned in the online guide.

Highlights: First fat-suit skit (could be seen as a lowlight), Cher's solo of "Workin' Together."