This is a Valentine's Day show. And it's a bit of a melancholy one because this show will only last three more episodes and be cancelled after Cher files for divorce on February 27, 1974, a week after this Valentine's Day episode.

Subway Intro:
Jeanette Noland makes an old beauty joke. Ricardo Montelban says Cher Bono is his favorite star. He says if you take away her beauty, great talent and fantastic acting ability, you have Sonny Bono.

Opening Song: “Hey, What About Me” (Video)
Cover of Anne Murray (1968)
Cher is in a white halter with red hearts on it and red pants. She looks very tan. Sonny is wearing a red suit with a white shirt and a long tied red scarf. 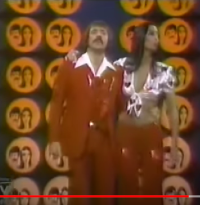 Breakout 1: Cher is wearing a white fur and with Jeanette Noland they visit Uncle Charlie at the cemetery. 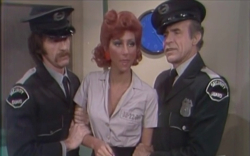 Breakout 2: Sonny is visiting a redheaded Cher in prison. Sonny cries melodramatic tears. Cher  has been placed in the men's penitentiary, indicating her many lovers (which is an interesting theme that has developed on the show in the historical Vamp skits and will play out into the early and late 1980s with her cowboy numbers in Celebration at Caesars and her "Turn Back Time" video with all the sailors). Ricardo Montalban plays the prison guard. This is the only known photo or video I could find of Montalban in this episode, which is a shame because he's very, very sexy in this episode (more on that below). I'll add more pictures as I find them. Also of note: a version of this skit will be resurrected on their reunion show.

Banter:  Sonny & Cher shake hands. My notes say something cryptic like Sonny telling Cher "you held up your end." Not sure what that means. They joke about John Wayne being the father of our country (oy) and about Sonny and presidential birthdays. Cher is 27, they say, and Sonny is "two years older." Good tryl he's 11 year's older. I guess nobody checked these things back then. Cher said she sent 14 cards out to the ones she loves. Sonny makes a joke about Cher's small boobs and says this whopper, "Everyone thinks I'm the stupid one." I just about spit out my coke the first time I heard him say this in this episode. Cher makes a short joke.

Are the wheels coming off? Was this the final straw? You can see her ribs poking out under the halter. When Cher talked about how much weight she lost and how stressed she was toward the end of their marriage and this show, you can see it here.

Sonny's Pizza: I've starred this skit. Sonny gets an offer to sell the pizzeria. Sonny and Rosa are engaged. Ted, Billy and Cher are pretending to be rich stars. There's an Exorcist movie joke. Ricardo Montalban comes in and offers $500. Calls Sonny a "runty kind of guy." Ouch. Billy Van gets angry with Sonny. People come in looking like Rosa and the gang. Teri Garr comes in as Cher.

At the Launderette: I've starred this one too. Teri Garr is wearing tight shorts and she mentions her husband, Bert, in this skit and actually gets her own punchline for a change. Laverne is in a gaudy fur coat. There's a bra strap joke (Laverne's are always showing), a joke about imitation fur. Teri grimaces at Laverne's Liberace joke. They talk about buying celebrity clothes (meta), particularly Fred Astaire's shoes.

I have never in my life seen a DeFranco Family performance before. I managed to avoid that somehow. And looking at this today, I know the shelf-life of this sort of thing is a nano-second and that this is probably days of melatonin supplements talking, but this kinda looks like fun.

Sonny's Lovers:
It's possible Sonny is gearing up for a solo show already because I believe this remake of the Vamp sketch with Sonny also appeared months later on his solo show The Sonny Comedy Revue, but I'm only saying that from seeing clips and photos. I've never actually seen the show. Sonny's plays a big-band-era crooner over-acting with a microphone introducing each sketch.

- Valentino: This is an Arabian story about water and oil. Cher, with movie star hair, gets thrown around a lot. There's a wine joke, a William Simon joke. Ricardo Montalban, who plays Ricardo of Arabia, calls Sonny a big desert dummy.

- Rhett Butler: In this Gone with the Wind sketch, Cher, as Scarlett, wears a big pink dress and is very tan. Sonny tries a Southern accent and fails. Cher is better at it. Ricardo plays the slave Rufus. There's a "mistress or mattress" joke (yikes) and a watermelon joke (double yikes). Cher runs off with Ricardo (as you would).

- Don Juan: I've given this sketch four stars. Ricardo Montalban looks very good in this skit as a bullfighter ("often mistaken for Caesar Romero") and Cher is very pretty in her see-through Spanish dress (I've given the dress itself two stars). The chemistry is very, very hot here. In fact, it was watching this skit for the first time that I said, you know this Ricardo Montalban guy... is kind of hot. I had only seen him on Fantasy Island before (sporadically, not one of my shows) and Star Trek: Wrath of Khan (which he was admittedly very hot in but that seemed an anomaly) and Naked Gun (where he was back to being a Fantasy Island type guy) and the Cordova commercials which I barely remember. After this Comedy Hour episode I began to see him in an entire new light. And just recently I discovered he was a frequent dancing partner of Cyd Charisse...another very hot combo and Ricardo seems to be the common denominator here.

Skit: Barbara Nauseous explores the energy crisis' effect on TV shows. She wears a wig with a gray highlight.

Concert: This is a false start. Sonny & Cher are reversed. Cher jokes about losing Sonny, which is prophetic.

Cartoon: John Wilson's cartoon for "Dark Lady" (Video)
The song, released in February, would reach #1 on March 22, 1974. This short seems to be made to look like a Disney cartoon where even the death is cartoonish. It's not  bad but kind of weird too. The cartoon illustrates the French Quarter of New Orleans and the happy couple when the fortune teller arrives (cat in tow). Her card address...

The two-eyed Jack means her man is cheating with someone she knows. She catches them in the act and murder ensues.

Concert: "Just You 'n' Me" / "The Midnight Hour" (Video)
Cover of Chicago (1973) and Wilson Pickett (1965)
I've double-starred this one. They're in very cute matching purple outfits. Cher wears a sparkly cap and a low bun, and a neck boa that poofs out when she jumps up and down. Lots of hand-hangin. Cher looks great in her pantsuit with long purple coat. Sonny gets a little too excited when the start in on the Wilson Pickett song and he tells Cher to "Sing it honey!" or "Sing it to me!" I can't tell which. They make a little knee kick move out of sync which makes Sonny smile.

TV Land and Get TV order the episodes differently, Get TV putting Sonny's Lovers sketch earlier in the show. Get TV is missing the Sonny's Pizza sketch and The DeFranco Family song. One of the few shows without a solo spot.

Highlights: The skit that will become The Prisoner in the reunion show of 1976. All the Ricardo Montalban stuff. The good concert segment.