This was the last aired episode of The Sonny & Cher Comedy Hour.

Opening Song: “Let Me Be There” (Video)
Cover of the Olivia Newton-John (1973)
Sonny wears a shiny silver suit (or is it gold as my notes say) with a bow tie. Cher (still very tan) wears a brown and silver halter (or is it black and gold?) with a long skirt and big, sparkly earrings. It's been hard to talk about outfits and color on this show as my bad bootlegs and youtube's bad bootlegs don't always match up.

Full disclosure, I heard this song on this show when I was about 4-and-a-half years old and spent the next few days walking the circle that was our house (kitchen, living room, hallways, den, kitchen) singing it loudly to, I'm sure, my tortured mother.

We get one last hair fix from Sonny (aww!), one last time for Sonny to sing with his knuckles to his hips. One last time with Cher's arm around his shoulder and his hand around her waist (aww!).

Breakout 1: Cher sporting a short, white wig and 1920s-style dress hits Ted Zeigler with her purse. Something about her new leading man. Ricardo Montalban gets confused with Sonny. This skit doesn't seem to have been included in the Ricardo Montalban episode.

Breakout 2: Sonny plays a dictator. Cher is a revolutionary with two long pig -tails. I've starred this. Something about two bananas in every garage. Sonny shoots a desk.

- Jeanette Noland with Sonny as a mugger. Lady luck did not appear in the Jeanette Noland episode prior.
- Cher is a judge, Merv Griffin plays a lawyer. Sonny is being sentenced. Lady Luck did not yet exist on the show when Griffin was a guest (episodes 19 and 36). This might be a missing Vamp skit.
- Sonny plays an astronaut and Cher is in green with a space wig from the planet Aphrodite. I've starred this look.

I have a note that in ending of Lady Luck where all the characters gather, Merv is wearing a Sonny wig.

Cartoon: "Bad, Bad Leroy Brown" (Video)
Cover of Jim Croce (1973)
Sonny and Cher provide a new intro to the re-airing of this John Wilson animation as Jim Croce was recently killed in a plane crash in September of 1973. This animation originally aired in episode 44. 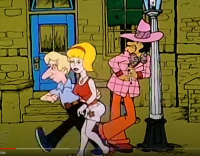 At the Launderette: Olivia and Laverne talk about support hose and The Exorcist movie which they claim opened two weeks ago (It really opened in December of 1973). They can't sleep now and one of them fainted in the lobby of the theater before the movie even started. Laverne compares her marriage to the movie.

Skit: The last of the French Legionnaire sketches which harkens back to the first few seasons. Cher is in a miniskirt and speaks with a French accent. Teri Garr, Ted Ziegler are in the sketch too about Le Vampire. Ted keeps getting blown up and tries to kiss Cher. Billy Van is Le Vampire. He gets a stake through the head, Steve-Martin style. I don't remember this one airing before.

Guest Spot: Jim Neighbors is in the South Pacific in World War II and sings "Beyond the Blue Horizon" while crazed, Asian-like soldiers try to kill him. This little skit should have stayed buried.

Country Store: The last General Store round-up with topics including legalized hitchhiking, Sonny's Frankenburgers, Sally and Cher as hookers talking about the energy crisis while sharing a lamp post, mother of the year, a high dive competition, European money, Sonny & Joe Namath talking about ecology and DDT, overlooked midgets, Amalgamated Food Products, The Exorcist. Sonny sits in a rocking chair with a girl on his lap. It's possible some of these bits aired before but they don't seem familiar.

Solo: "I Got a Name" (Video)
Cover of Jim Croce (1973)
Cher wears a yellow halter dress (starred it!) and big gold earrings and a long braid. Cher has never done this song on the show before. . But seems like (from her makeup and the production values complete with the Vaseline on the lens trick) an older season's solo, maybe one that was never aired. Perfectly lovely.

Cher wore this same dress when Sonny & Cher were presenters at the Academy Awards in March 27, 1973 so this solo may be from last season. 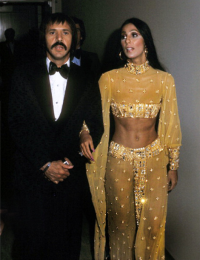 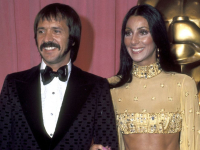 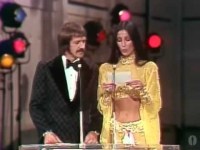 IGUB: They talk about the trouble Chastity has reading (in the late 1980s it will be revealed Chas has dyslexia) and they joke about Sonny's issues reading (although Chas probably inherited his dyslexia from Cher, who found out she had it at the same time). Cher likes Joe Namath. There's a Sonny's bad voice joke.

Highlights: Last show to air. Cher singing "I Got a Name."