According to some reports, negotiations began for the new configuration of this show back in May 1976 when Cher became overwhelmed with the tasks of helming her own show. Around that time, plans were made to meld the Cher show into this new incarnation of Sonny & Cher TV. Reports also list this reuniting of Sonny & Cher as one of the most watched TV shows of the late 1970s, up there with "Who shot J.R." It's therefore strange this historic episode wasn't one of the ones included in the TimeLife compilations.

Introduction: The show teases us with a delayed open. We see a title card with "The Beat Goes On" and then Raymond Burr comes on as a TV executive saying, "Cher did what?" (she's always in the tabloids, see). Other talking heads all abuzz about the reunion of Sonny and Cher are Freddie Prinze, Jerry Lewis (who makes a joke about reuniting with Dean Martin), Tony Orlando, Jim Neighbors who says about their reunion, "I thought they found a cure for that." Ted Zeigler is back as pretty much the only cast member (who needs a cast?) and here he plays Henry Kissinger who is in negotiations with CBS around Cher showing her belly button. The truth is things have gotten quite a bit more conservative as the decade progressed and things Cher did on the first show (married to Sonny) the censors will now disallow (married to Gregg Allman). Cher is always a potential scandal waiting to happen. 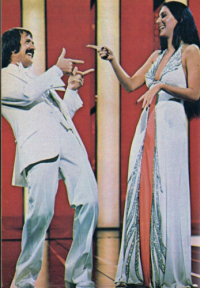 Opening Banter and Song: "Love Will Keep Us Together" (Video of banter, Audio of song)
Cover of Captain & Tennille (1975)
The announcer says, "Together again for the first time..." (except that they've made scattered appearances on television together since their divorce, like The Tonight Show, check out the Sonny rug-span there!) so this really isn't true. The new show has revolving panels they walk separately through and as they come on stage, they get a standing ovation from their studio audience.

They do their handshake and we notice Cher is a little pregnant. Sonny wears a white suit and bowtie. Cher is in a white gown with a cut-out red panel in the center and silver wings. He walks a circle around her and looks at her barely-a-baby-bump." He says, "When you do something, you really do it." Cher does a new thing in these opening conversations where she rubs her hand together. Sonny then informs the audience (for anyone living under a rock), "Cher and I aren't married anymore." Cher steps on one of his lines and then Sonny admits working alone "wasn't many laughs" and Cher indicates his solo show wasn't very good. Sonny insists they are great friends and "have great respect for each other."

Cher tells Sonny there's a hair in his mustache which she proceeds to remove. They are affectionate as usual but their jokes at each other's expense have a new bite. A lot of water has gone under the bridge. They talk about great comedy teams who were not married: Tracy and Hepburn (their great love affair was still not public knowledge at this time), Fred Astaire and Ginger Rogers, Rowan and Martin (Cher jokes). They are laughing and seem like they're having fun and happy to be performing together again.

They sing the song. Cher has a new ferocity when she sings. At the end Sonny says he's worried about singing love songs with Cher now that they're divorced and off with new lovers (Cher with Gregg Allman, Sonny with Susie Cohelo). Sonny tells the audience it would be misleading because "I'm not available." He tells Cher to get back on her side (this after circling her earlier!) He tells the audience they are still in love "from the nose up."

The stage has better lighting now and Cher is wearing less makeup. Her hair looks long, thick and great. She fluffs it a lot.

Skit: This show has it's own version of skits about how dumb and clumsy President Ford is. In this version Ford is made to wear a toddler's safety helmet.

Charlie and Lucy: We're in the yard with Charlie Brown (Sonny) and Lucy Van Pelt (Cher) as the frame for little skits with Ted Ziegler, Billy Van and Gailard Sartain (all inherited from previous shows):

- Sonny wearing a suit with tails does bad dancing to "Steppin Out." Cher plays a Ginger Rogers type in a pretty white and silver dress. Sonny gets caught in her boa and disappears in some stairs.

- Sonny plays Elmer Fudd and Cher plays Bugs Bunny. They both do the character accents and chase each other around.

- In a Bicentennial skit Sonny and Cher play George and Martha Washington. He is writing his farewell speech to his troops. You notice here how Sonny is looking older. There's a President Ford joke.

Skit: President Ford has a pool accident, my notes say. [Cher scholar Jay has notified me that this skit is about President Ford ripping fabric on a pool table with his cue stick...because he's clumsy.]

The Sonnytone News: This is kind of the new Window on the World with blackout skits about topical subjects. This segment has Paul Michael Glaser (from Starsky & Hutch), Carol Burnett plays Queen Elizabeth being hit by an anchor, football player Don Meredeth and Cher revises her Barbra Nauseous character spoof of Barbara Walters. There are also break-out skits:

- King Kong Returns: This is the debut of one of my favorite ever Cher characters where Cher plays Faye Wray in a crimped, blonde wig lounging around on a big prop of King Kong's open hand. Just the big, wiggling hand alone would crack me up. Cher and King Kong are now living together in New York City and having fun domestic conversations. I loooved this as a kid and I still love it. There are jokes about living in Manhattan, a double entendre possibly indicating Kong's very large schlong, and a joke about electrolysis. Cher asks him what sign he is and says it took an out-of-towner to get her to the top of the Empire State Building. She says she likes him because he's a good dresser. Cher spends most of her time in these skits filing her nails.

- There's a funny skit about a banana-making factory with Richard Thomas.

Cher Solo: "Breaking Up Is Hard To Do" (Video)
Cover of Neil Sedaka (1962)
Cher does a slow version of this song looking like Barbra Streisand. This show has taken its cue from her solo show and built a full set for her solo. Sonny interrupts the solo to warn Cher again she shouldn't be singing love songs. She's dressed like a trendy traveler and sings from a room full of packing trunks. Kind of a sedate, anti-climactic solo spot for the opening show. 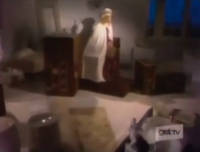 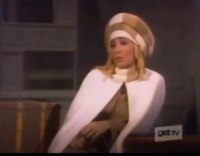 Skit: We open with Rona Barrett is in a chair. My notes make absolutely no sense of this skit except for the fact that Richard Lewis appears in it without a shirt. (That must have seemed important for a moment.) A bad comedy routine is sped up, there's a baby elephant, bad green screen, Cher is dressed as Cruella de Vil and then changes outfits a lot into a Chinese dress, a showgirl dress, an Arabian dress (all which probably tells you why she was labeled a "clothes hanger" at the time). There's a cross-dressing joke.

[Cher scholar Jay has given us more information: Rona Barrett introduces the "CIA Follies" opera and it's about the CIA trying to figure out how to get the public to like them. Cher does costume changes as she sings. I should watch this again. Sounds like costume change humor.]

Concert: "You've Got a Friend"/"Where You Lead" (Video)
Both covers of Carole King (1971)
Sonny & Cher did this song a lot in the early 1970s on other variety shows and on their second Live album. Cher also used the song as one of her solo show openings. Cher wears a purple suit. Sonny is in a black suit with a bow tie. Cher wears big purple boots. My notes say, "Cher has moved on vocally." They don't match so well anymore. Cher is also moving better with more confidence, throwing her mic. 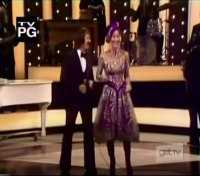 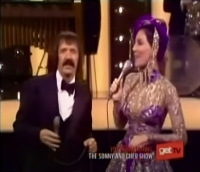 IGUB (Video)
They thank the great stars who popped in and helped (and Cher says 'you're welcome') and joke about being together again and it being fun. Sonny explains that they worked together for 12 years and always said goodnight with the same song and don't plan on changing now. They sing "I Got You Babe" and Sonny does his hand on his hip thing. Cher says goodnight this time. The exit together and separate between the revolving panels. This little exit into separateness always makes me a little sad.

It has just occured to me now after all these years that the ampersand between their names on their stage logo is actually a hand with two fingers crossed.

I don't have a guide for this later show that lists what the original airings were so I am unable to list what songs or skits TVLand and GetTV cut. But Cher scholar Jay has noted that GetTV cut the Charlie Brown/Lucy skits.

Highlights: This show made history with the public anticipation and ratings it generated. We saw the debut of the dramatic, new yellow stage and new skits like Cher with King Kong. The new, confident (pregnant) Cher is really something. The shy Muppet-Cher of the 1960s, the stone-faced Cher of their earlier show, the aww-shucks, groovy people-pleaser of the solo show....all these incarnations are gone and we see the first version of the modern Cher we would recognize today, still glamourous but tough and someone who will start to take more risks and no prisoners.