Intro: The Beat Goes On globe appears and the announcer makes some jokes, President Ford ruining a pool table, a Cher pregnancy joke. There are also previews of the show's skits soap opera style.

Opening Song: "You Are the Sunshine of My Life" (Video)
Cover of the Stevie Wonder (1973)
Sonny wears a pink suit (cajones!) and Cher wears white pants covered by an off-the-shoulder diagonally stripped sheer top, cut full to hide her pregnancy. Sonny hams it up and Cher keeps telling him to "sell it." Sonny grabs her hand and fixes her hair. Cher hits some low notes. Cher sang this song with The Osmond Brothers back on her solo show.

Opening Banter: Sonny tries to tell Cher she sings with a repetitive hand movement, which is rich coming from him. And like not a thing, too. And then he moves to grab her boobs (which would get you totally fired if you were a U.S. Senator), but in any case he says this gesture embarrasses him because she looks stupid. Everyone laughs because this is obviously a joke about projection.

Sonny then asks Cher if she notices anything different about him. She wants a hint: is it bigger than a breadbox? About my mind, he says. "Smaller than a breadbox then," she quips. He then goes on to tell her how Italians like challenges. They list Italians. Sonny says he took a seminar on how to get power and what to do with it. Cher says, "I can tell you what to do with it." Sonny jokes good naturedly, "You probably could. And have." They laugh. Sonny talks about his "power gaze." I don't believe Sonny's completely kidding here...he throws down a stern stare quite often and Cher’s sister Georganne LaPiere once said on Behind the Music how intimidating it could be. Examples of the Sonny power stare: 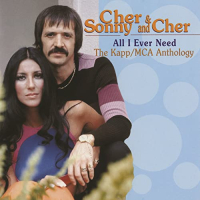 Cher decides to stop listening but then Sonny convinces her to try to resist his “power gaze” Cher makes a short joke. Sonny tries to make her feel fearful, insignificant, helpless and inferior. Oy. It fails to work. Sonny jokes that it worked when he did it in the mirror.

The Three Fairy Drag Queens: (or Women Behind Famous Men)

+ Punch and Judy: McClean Stevenson, Sonny and Cher and Chastity are in this one as puppets.

+ Mr. and Mrs. Hannibal Crossing the Alps with two boys: I've starred this one, full of kids-in-the-car jokes.

+ Mr. and Mrs. Robert Fulton (no notes on this one)

Sam Spade: This case takes place in an Asian drinking establishment. Cher plays Shanghai Suzie in a fabulous wig (my notes say). "Cher looks great." This might be an opium den because my notes reference a "monkey on her back" joke.

Skit: We return to the President Ford is a klutz joke. In this one Ford spills a coffee he's having with Henry Kissinger.

Cher Solo:" How Long Has This Been Goin' On" (Video)
George Gershwin and Ira Gershwin from the musical Funny Face (1927)
This version starts with a rain of sprinkles. Cher wears a copper head covering and a huge copper dress. The earrings are fabulous! Lips licks, hanging hand. I've starred this. There are less full body shots now that she's progressing in pregnancy. Best use of the word dunce in a song. What a break, indeed.

Concert: "Love Song"/"Hang On In There Baby" (Audio Only)
Cover of Elton John (1970) and Johnny Bristol (1974)
I love these two songs, just not Sonny singing them. Cher's version of "Love Song" on her solo show was better. You can tell Sonny is unenthused about these songs. Eh.

Gone With the Fat Musical: In the intro, Sonny is in a suit, Cher has a curly wig and a big black dress. Sonny jokes about Cher's tabloid life and they talk about a Sonny & Cher movie museum. This is a fat suit version of Gone With the Wind. McLean Stevens plays Rhett Butler, Cher plays a raven-haired Scarlett and Sonny plays Ashley. If you remember back to the end of The Sonny &Cher Comedy Hour (skits like Tonsmoke), this is the skit where if any character references a popular saying with food in it the cast rubs their hands together and says, "bread in the soup....mmmmm" or "a fine kettle of fish....mmmmm." It shouldn’t be funny but…it is.

IGUB: Sonny & Cher shake hands. My notes say there is a banana-penis joke and a joke about Cher being fat. They banter in between the lyrics of the song.

Thanks to Jay for the run-down on the re-airings of this episode. TV Land is missing the duet. I was a terrible secretary with this episode. Pay cut for me.

Highlights: Some funny things: the family car ride across the Alps, more fat-suit funnies and Cher's solo of "How Long Has This Been Going On."