Cher was an entertainment phenomenon of the 1970s with three television shows on the air and many highly-anticipated TV specials. Cher's TV appearances can be categories this way:

In all aspects of Cher's TV appearances there has been an important aspect of costumery in her image making, starting from early appearances with fur fests and bell-bottoms on music shows of the 60s to work with Bob Mackie on her variety shows where she bared her bellybutton to outfits worn on interviews in talk shows and outrageous headdresses in TV concerts and academy award shows. "What will Cher be wearing tonight on TV" has become a decade-in-decade-out reason to watch. 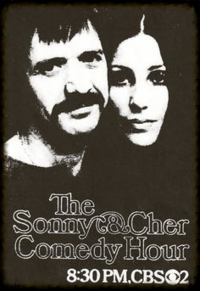 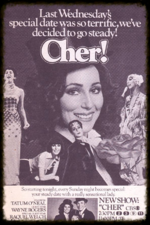 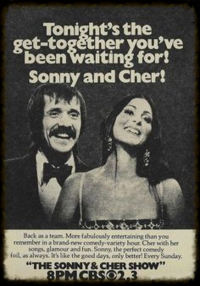 These are limited to songs made into official videos as promotions for music television and not songs taken from variety show appearances. (stars notes the best ones)

Spending over 40 years in show business, Cher has racked up oodles of TV appearances. It would take you a year in a booth at the Radio and TV Museum to track them all down and for 30 seconds of sound bites in an "I Love Lucy" or "I Love Looney Tunes" specials, it's not worth it. Here are the ones that are worth seeing:

This list is US television only. There are many many amazing European performances of note: National Lottery, Top of the Pops, Wetten dass, and many segments of 60s videos found on YouTube. Many of them could stand in as interesting music videos themselves, such as clips of "Mama" and Sonny & Cher's clip for "Circus."